It’s that bittersweet time of year again. Trees are shedding their final leaves, while stores have started to stock their shelves with holiday decorations.

But grocery stores aren’t the only ones with the winter season on their minds. Near the end of October our local brewers started releasing their Winter Seasonal Ales. So why not  get festive and kick off the holiday season with one of these festive brews?

To help you out we’ve made this list of what seasonal ales to look out for and get you in the holiday spirit: 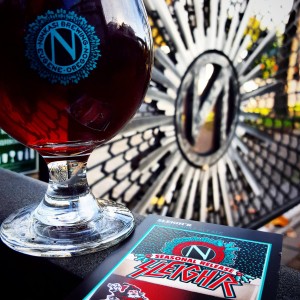 A close look at this double alt seasonal favorite from Ninkasi

This beer gets bonus points for being available on tap at Ninkasi’s tasting room, as well as, bottled. So there is no excuse not to try it! 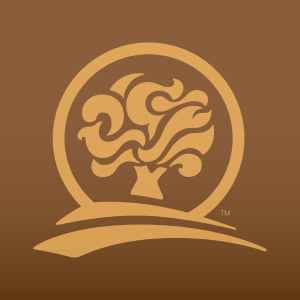 Oakshire Brewing has two seasonal favorites to watch out for this winter. The first is their widely recognized Ill-Tempered Gnome. An American Brown Style (hoppy brown) is brewed with six different specialty malts, resulting in a more complex flavor.

After brewing and fermenting, it's sent to brandy barrels to age for a year, making it a creation quite worth the wait.

Both of these brews will be on tap at the Oakshire Taphouse throughout the season, as well as, located in stores in 22oz. bottles. 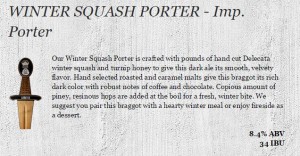 For a new twist on a classic, beer enthusiasts should check out Viking Braggot’s Winter Squash Porter.

This imperial porter is made unique with pounds of Delecata winter squash and turnip honey.

Top off a hearty winter meal with this rich, velvety brew and enjoy the many flavors of the season in one glass.

For the cider lovers there is WildCraft Cider Work’s Perry collection. Make sure to keep an eye out for the Elderberry Perry.

This cider is crafted with elderberries found in the mountains of Cottage Grove, hand destemmed and fermented whole. But the final product is worth the effort, because these berries help add a hint of fruitiness to the rich bodied pear flavor of the cider.

Can’t choose just one? Make sure to bring along the Eugene Ale Trail Passport and get stamps from the breweries you visit. Get eight stamps and you can pick up your own 32 oz. “Eugene Ale Trail” growler from our Adventure Center in Springfield!

And while you're touring, knock these winter favorites off your list:

McMenamins (Available at all three locations in Eugene)

Katie McGuigan has lived her whole life across the Pacific Northwest. With a prepacked box of camping supplies sitting next to her front door, Katie is always ready for weekend adventures. When she is not on the trail she spends most of her free time enjoying Lane County's local craft breweries or cooking up the freshest veggies from her garden. She is a past Tourism Coordinator for Travel Lane County.

Plan your trip to Eugene, Cascades & Coast.
Get A Free Guide
E-News Sign Up
close