Eugene gets a lot of sports-related attention, particularly for our football program and our nickname of “TrackTown USA”. We are home to a variety of teams and sporting events from the conventional to the more unusual (think Superhero Dodgeball). The Generals Hockey team has called Eugene home for close to ten years, and if you haven’t seen them play, now is the perfect time as they gear up to kick off their 2013 – 2014 season. 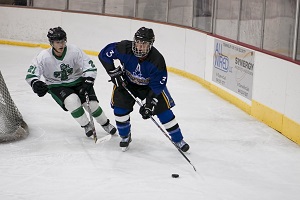 The Generals belong to the Northern Pacific Hockey League (NPHL), an amateur status Junior Hockey League made up of six teams from cities around the Northwest, including Bellingham, Bremerton, Eugene, Kennewick, Vancouver, and this year’s newest addition, Everett, Washington. Last year, the Generals finished second in the league for the regular season, but were eliminated in the first round of playoffs. This year is a chance for them to redeem themselves with a stronger playoff finish.

Most of the players in the NPHL are between the ages of 16 – 19, with a handful of 20 year olds. The league strives to develop the younger players and hone their skills before they advance onto Tier I and Tier II Hockey Leagues around the U.S., while the older players are able to make the transition directly into a Division III college hockey program. Each team is allowed two “imports” (non-US citizens) on their roster. This year the Generals have one player from Latvia and one from Switzerland. The rest of the roster includes many players from the West Coast, although some come from as far as New Jersey and Florida.

The team stays very busy, with a minimum of six hours of on-ice practice required each week, in addition to off-ice practice that includes strengthening, conditioning, and skill development. Some of the team members are also students, juggling their time in the classroom, in the gym or on the ice. Players live with host families throughout the community that provide them with a home away from home.

The Generals practice and compete at The Rink Exchange at The Lane Events Center which underwent a handful of improvements during the Spring of 2013 in anticipation of the upcoming season. A fully-equipped hockey shop is opening at the venue this year as well, and fans will find it stocked with all the gear a player would need. Generals’ merchandise is also available for purchase at the games, which will include new items and designs this year. A number of special events are planned throughout the season, including a blood drive (at a to-be-determined date) and Breast Cancer Awareness Night on October 19th, with the team wearing unique jerseys that will be auctioned off on eBay to support breast cancer awareness. 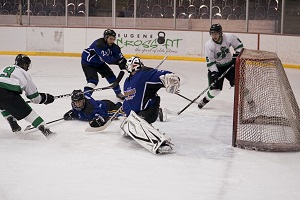 The Generals seeing some action near the goal

Come cheer the Generals on at their season opener on Friday, October 4, at 7:35 p.m. against the Tri-City Outlaws. The Rink Exchange is located at 796 W. 13th Ave in Eugene, and is the only ice arena within a two hour radius. Check out a Generals game, and then try your hand (or feet) at ice skating the next day during one of The Rink Exchange’s many public skating sessions. If you can’t make it to a game in person, you can find all of them streamed live online for free in HD through the Eugene Generals Hockey Network (EGHN). Here’s to a great season!

A special thanks to the Eugene Generals for providing images from previous seasons.

About the author: Jessica Chestnut is the Social Media and PR Manager for Convention and Sports. Although she’s only been in Lane County since 2008, there’s nowhere else in Oregon she would rather be. She spends her free time exploring the great outdoors, snowboarding, camping, floating the McKenzie, watching college football, enjoying local microbrews and spending time with her husband and puppy.