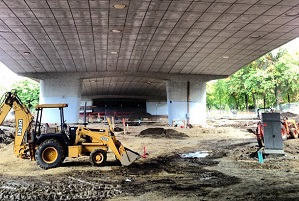 Eugene is home to a handful of skateparks, which provide skateboarders, BMX riders, and other wheeled enthusiasts a place to perfect their tricks. However, the sometimes temperamental Oregon climate limits the time that these parks can be enjoyed. Particularly during the winter months, the wet concrete does not play well with wooden decks and metal bearings. Luckily for skaters and non-skaters alike, all of that will change with the opening of the WJ Skatepark + Urban Plaza, slated to be finished in the spring of 2014.

At 23,000 square feet, the park will have the honor of being the largest lighted and covered public skatepark in the U.S. With its location underneath the Washington Jefferson Street Bridge, the skatepark will be able to operate year-round, regardless of what Mother Nature dishes out. In addition, the Urban Plaza will provide an area for spectators of the park to relax, as well as offer additional space for a variety of community gatherings and events. 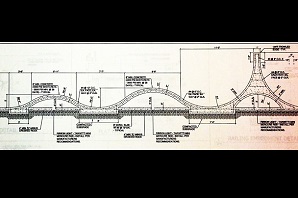 The long-awaited skatepark has been discussed since 2004, when 1,700 petitioners submitted a proposal to Eugene’s City Council requesting a large covered and lit skatepark for Eugene. Ten years after the proposal, the park will become a reality thanks to one of the most respected names in skatepark design and construction, Dreamland Skateparks. Expect to see a blend of street and tranny-style terrain with something for all skill levels, along with one-of-a-kind skateable art including a river theme throughout to stay true to our area.

The City of Eugene is adding other features at Washington Jefferson Park aimed at increasing the overall security of the park, as well as bringing in people from around the area that may not skate. The new design includes the Urban Plaza, restrooms in a more visible location, vendor pads ideal for food carts, new paths, bike racks, drinking fountains, energy-efficient lighting, and well-thought out landscaping to provide improved sight lines. The features are all measures to increase the sense of safety at the park. Much of the existing infrastructure is being overhauled as well, with utility lines being replaced, and repairs being made to the electrical, drainage, and irrigation systems. 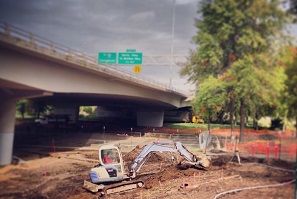 Take the construction, design, and repair, and then add in “soft costs” (things like project management and engineering), and the total project is expected to run around $2.5 million. The City of Eugene is covering around $2.2 million of the project, with the funds coming from parks system development charges (fees paid by developers when they construct new buildings or houses). The city also received a State Park and Recreation Department grant worth almost $175,000. Another $150,000 in cash and inkind donations have been raised by Skaters of Eugene Skateparks, The Downtown Eugene Rotary, and the Eugene Parks Foundation.

To create a destination skatepark that has national appeal takes an incredible amount of time, money, and planning, and the skate community of Eugene has shown their dedication to this project. We are one step closer every day to having something in Eugene that will let our local skaters ride any month out of the year, plus have skaters around the nation talking about (and visiting). The City of Eugene will also reap the benefits of this project, with a revitalized Washington Jefferson Park that is sure to be appreciated by the entire community.

About the author: Jessica Chestnut is the Social Media and PR Manager for Convention and Sports. Although she’s only been in Lane County since 2008, there’s nowhere else in Oregon she would rather be. She spends her free time exploring the great outdoors, snowboarding, camping, floating the McKenzie, watching college football, enjoying local microbrews and spending time with her husband and puppy.